CARY, NC (December 21, 2020) – The V Foundation for Cancer Research, a top-rated cancer research charity, has awarded three Comparative Oncology Research Consortium (CORC) grants of $500,000 each. The grants will fund cutting-edge canine comparative oncology research, a field of study designed to explore similarities and differences between human and canine cancers. Approximately 1 million dogs are treated for cancer in the U.S. annually. Because humans and dogs are 85% genetically similar, canine tumors can share multiple characteristics with human cancers, including responses to therapies. The goal of CORC is faster and less costly drug therapies, as well as better informed clinical trial designs for humans and dogs.

“The support from the V Foundation of the research efforts of the Comparative Oncology Research Consortium is invaluable in advancing improved approaches to prevent, diagnose and treat cancer in both human and canine patients,” said Michael Kastan, M.D., Ph.D., executive director of the Duke Cancer Institute and member of the V Foundation Board of Directors. “All three of these newly supported projects focus on stimulating the patient’s own immune system to fight against their cancer. Lessons learned can lead to new treatments for cancer patients on either two or four legs.”

Each V Foundation CORC grant has been awarded to a team that has a physician from an NCI-Designated Comprehensive Cancer Center and a researcher from a veterinary medical center. This game-changing approach can accelerate FDA approval of new technology, drugs, diagnostics and devices for the treatment of cancer, and it can facilitate a more precise use of the therapies already available, to improve human and canine patient outcomes.

“The Comparative Oncology Research Consortium is humbled by the V Foundation support for cancer research across all species,” said Rodney Page, director of Flint Animal Cancer Center at Colorado State University. “I am confident that these projects will provide meaningful discoveries and understanding.”

The investigators receiving grants are:

“It is an extraordinary honor to receive this award,” said Lawrence. “Dr. Vallera and I are very excited to contribute to the mission of achieving victory over cancer. We are deeply grateful for the remarkable opportunity to pursue innovative research using pet dogs with sarcomas to evaluate new treatments to improve outcomes. Our hope is that the support for this multidisciplinary, comparative oncology project will accelerate a groundbreaking approach that can be swiftly tailored to humans with sarcomas.”

The V Foundation holds 10 consecutive 4-star (highest) ratings from Charity Navigator, America’s largest evaluator of charities, and is among the top 2% of all charities evaluated. The V Foundation is a GuideStar platinum-rated charity. For more information about the V Foundation, its grants program, the Scientific Advisory Committee or to donate, please visit www.v.org.

About the V Foundation for Cancer Research

The V Foundation for Cancer Research was founded in 1993 by ESPN and the late Jim Valvano, legendary North Carolina State University basketball coach and ESPN commentator. The V Foundation has funded more than $250 million in game-changing cancer research grants nationwide through a competitive process strictly supervised by a world-class Scientific Advisory Committee. Because the V Foundation has an endowment to cover administrative expenses, 100% of direct donations is awarded to cancer research and programs.  The V team is committed to accelerating Victory Over Cancer®. To learn more, visit v.org. 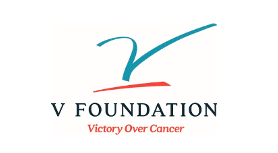